The Bijagos Islands, are a group of about 88 islands and islets located in the Atlantic Ocean and are part of the African nation of Guinea-Bissau. The Bijagos archipelago was formed from the ancient delta of the Rio Geba and the Rio Grande and spans an area of 2,624 km2 (1,184 sq. miles). 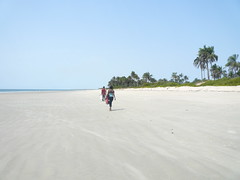 There is a high diversity of ecosystems: mangroves with intertidal zones, palm forests, dry and semi-dry forests, secondary and degraded forests, coastal savanna, sand banks and aquatic zones. The archipelago was declared in 1996 a UNESCO Biosphere Reserve--Boloma Bijagós Biosphere Reserve, known for animals including marine turtles, hippopotamus and the southern islands are today a nature reserve.

Bijagos is a truly beautiful. We can help you to plan your holiday with everything from hotel reservations, rentals and excursions.